There is a mental sickness – a spiritual darkness, if you will – that has engulfed the entire world. There is also an insistence by the religious system called by men, Christianity, to disobey and defy the Creator of the heavens and the earth. That sickeness has caused a dimming of the eye and of ones perceptive powers. Thus, the truth cannot be seen through dimmed eyes.

At that time if anyone says to you, ‘Look, here is the Messiah!’ or, ‘There he is!’ do not believe it. For false messiahs and false prophets will appear and perform great signs and wonders to deceive, if possible, even the elect. (Matthew 24:23-24)

Jesus spoke these words more than 2000 years ago. Jesus spoke of false Messiahs (false Christs) and false prophets that would be a part of the human experience that they would perform great signs and wonders that would deceive even his chosen ones; that is, the ones Christ himself choses – Apostles.

Note: Do not confuse Apostles with Disciples. An Apostle is someone that Christ himself chooses to follow him; he will be their teacher. While Christ initially chose 12, there would be many more he would chose in future days. A Disciple is someone who themselves chooses to follow Christ. Christ does not call them. They hear his teachings and then respond to be his disciples. None of Christs Apostles were first taught by him and THEN they became his followers. They acted out of faith. Jesus said follow me and they did. A Disciple will have heard Christs teachings first and then they chose to follow Christ. Disciples are not chosen ones.

At Matthew 24:23-24 many people focus on the false prophet part. They pay little attention to the False Christs part.

A False Christ does not have to be a literal flesh and blood person. Anyone knowing Christs teachings know that the world will never see him again.

Before long, the world will not see me anymore, but you will see me. Because I live, you also will live. (John 14:19)

Even Jesus’ elect (the chosen Apostles) understood that they would not see Christ again with the physical eye, but would see him in a different sense; with spiritual eyes, with perception, with eyes of faith. They would know that one walks by faith and not by sight.

Yet, False Christs would even attempt to deceive the chosen ones who see not with the physical eye, but with eyes of faith. This is worth some serious sit-down throught and examination. If the chosen ones of Christ would also be the targets of deception by False Christs and they know that Chist is no longer flesh and blood (but is an invisible spirit being), they would not fall for a literal flesh and blood Christ as many in the world still think The Son of God is. The False Christs that would appear and perform great signs and wonders would not be something real. It would be a symbol or something that falsely represents Christ. What can that be?

Look at the image below and honestly ask yourself who this person is. 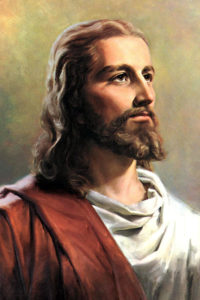 This image is so powerful that millions upon millions of persons have it displayed on the walls in their homes, in their places of worship, in their wallets and purses, and as I stated earlier, in art, film and literature. Even The Motion Picture Industry portrays The Son of God, The Christ in this likeness. This false image has influence over the lives of millions. It has produced this great sign (influence over people and nations) and wonders on the earth.

It is in this manner that what the real Jesus said at Matthew 23:23-24 has true meaning:

Jesus also taught how his Disciples were to perceive the Father in heaven at John 4:23-24. He said:

The Father in heaven is a Spirit, not a flesh and blood entity. Therefore, he cannot be worshiped as someone that is flesh and blood. For those of you who think that God can be seen, I advise you to read what Jesus said at John 1:18. But notice the words of the Apostle Paul at Col 1:15 concerning God’s substance:

See that? God is invisible! God is a Spirit! A Spirit cannot be seen! So our worship of the Father has to be through the eyes of faith, as one who cannot be seen. (See the definition of faith at Hebrews 11:1)

Who is the truth? At John 14:6 Jesus said that he himself is the truth. So worship of the invisible Father, must be in Christ himself. That is, in the truth of Christs teachings! But what of Christs substance today? Is he flesh and blood? Is he a man?

The true Christ today is invisible. He ascended into heaven more than 2000 years ago back to the place from which he was sent. The true Christ is not someone who can be seen with the physical eye as he is a Spirit just like his Father in heaven. There is no flesh and blood in heaven.

I declare to you, brothers and sisters, that flesh and blood cannot inherit the kingdom of God, nor does the perishable inherit the imperishable. (1 Cor 15:50)

Thus, any visible image we see of Christ today is a false Christ. Yes, the world has been deceived in a bad way. Besides, no one has seen Christ to portray him in any human likeness.

So, the idea of flesh and blood people living on the earth forever is not something Jesus taught. We will be much different than we are now. One cannot imagine it! But we will be alive and happy beyond all imagination.

The expression man does not necessarily mean a flesh and blood being. Man is much more!

Heb 2:7 and Pslams 8:5 shows that God made man “a little lower than the angels.”

A little lower than the angels? Wow!

We have no idea what we will become in the future.

The Jesus Chrst of today is a creation of man because he has been made flesh and blood and he is a false Christ. Even the teachings surrounding that false Christ are largely false.Christ cannot be followed through the pages of a book. The true Christ cannot be seen and his teachings today do not come through a book (that can be seen), but through Holy Spirit, which is his baptism. Water baptism is false and it is not the baptism of Christ, it is the baptism of a dead man, John the Baptizer. (Matthew 3:11)

The rabbit hole of deception is great in the world and the religious system has a very tight hold on the masses. It will be difficult for this truth about Christ to shine through.

What Is The Mark of Cain?