What is The Lake of Fire?

Do visions of persons existing in a fiery place of torment come to mind when you think about The Lake of Fire? Is this a real place? What really is The Lake of Fire, according to the Scriptures?

In the preceding paragraph I was careful to state according to the Scriptures because explanation of the Lake of Fire also come from sources other than Scripture.

What Is The Lake of Fire?

The expression Lake of Fire is found only in The Book of Revelation. For example, at Revelation 20:14 we are told of it:

And death and hell were cast into the lake of fire. This is the second death. 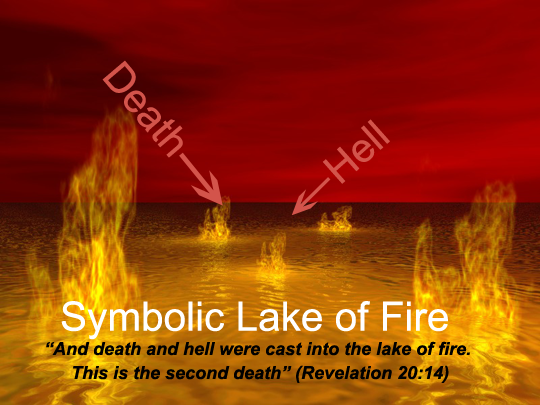 Once the reader understands what the Second Death is, it should become clear what the Lake of Fire is.

All humans have a birth, grow old, get sick, and die. This preceding statement tell us that we all had a First Birth and will have a First Death. This is a fact of life. We were all born and we all die.

Therefore, in order to qualify for a Second Death one must first have a Second Birth. In answer to a question the Pharisee Nicodemus had concerning this Second Birth, Jesus answered at John 3:3-4:

Verily, verily, I say unto thee, Except a man be born again, he cannot see the kingdom of God. Nicodemus saith unto him, How can a man be born when he is old? can he enter the second time into his mother's womb, and be born?

Notice Jesus' mention of born again. What was Jesus talking about here? The promised resurrection.

Notice what Jesus said about that future great day at John 5:28-29:

Notice who Jesus said would be resurrected from their graves: ALL PERSONS.

This resurrection will be a resurrection from the First Death to a Second Life or Second Birth. Make no mistake about it, all of us must literally die before we can have a Second Birth (Born Again). This is what Jesus meant when he said "Except a man be born again, he cannot see the kingdom of God."

Jesus was telling Nicodemus that it would be impossible for a person to see God's Kingdom unless he first dies and then resurrected back to life again. That is, being Born Again.

Why would it be impossible to see God's Kingdom unless one is Born Again? The answer is very simple and can be found at Romans 6:7, which reads:

Anyone who has died has been set free from sin.

Romans 6:7 is telling us that anyone who has died (First Death), has had their sin removed from them. In other words, ones death is full payment for ones sin. This is exactly what Romans 6:23 says:

For the wages of sin is death.

So when a person is resurrected from the dead, they are resurrected with no sin bound or attached to them. Those sins died when they died. In fact, these were the sins Jesus sacrificed his life for.

Therefore, any person who has died (First Time Literally Dying) is resurrected to back to life again (Second Life or Born Again) will have no sin on him, then he is in the proper condition to be able to see God's Kingdom.

Now, we can put all of this together to understand what The Lake of Fire is.

Since Revelation 20:14 says that The Lake of Fire is the Second Death, we can now use the Scriptures to identify exactly what it is.

Please turn your attention to Revelation 21:4 and notice what it says about death:

And God shall wipe away all tears from their eyes; and there shall be no more death, neither sorrow, nor crying, neither shall there be any more pain: for the former things are passed away.

Did you see that? It says that THERE SHALL BE NO MORE DEATH.

If Revelation 20:14 previously stated that DEATH is thrown into The Lake of Fire, what does that mean? It means that The Lake of Fire is a symbol of BEING NO MORE or NON-EXISTENCE or ETERNALLY GONE.

And, since hell is also cast into the Lake of Fire, then it too, will BE NO MORE or one day NON-EXISTENT.

Notice that death and hell are mentioned together at Revelation 20:14. There is a good reason for this. Because they complement each other. When any person dies, that person enters into hell – THE GRAVE.

If DEATH WILL BE NO MORE, then there will be no need for graves.

They do not consider what Revelation 20:14 says about hell itself: that it is cast into the Lake of Fire. If The Lake of Fire represents non-existence, then this means that their fiery hell is not eternal; it will become non-existent just as death will.

Anyone and anything cast into the Lake of Fire will simply no longer exist. Persons who experience the First Death (all of us) still exist in God's mind as dead persons. Scripture teaches us that Death, Hell, the future Beast, the future False Prophet, anyone not found in the Book of Life, cowards, those without faith, murderers, fornicators, liars, idolaters, and the Devil will one day go into non-existence; The Lake of Fire. This becomes their Second Death.

There is no Third Birth after entering into non-existence. Such things as lying, murdering, fornication, faithlessness, idolaters; and such entities as the False Prophet, the Beast and the devil will BE NO MORE.

This could be confusing to some because it appears that what I am saying that persons who – for example – are liars now and then they die and later are resurrected with no sin will go into non-existence. No, that is not what I am saying.

We must carefully consider the TIME PERIOD in which the lying, murdering, fornication, faithlessness, and so forth will occur. It is not at present; but in the future after the 1000 years have ended.

No person up to today has done anything that God will not forgive. Jesus showed this when he asked his heavenly Father to forgive those who persecuted him and put him to death.

So that he will not be able to interfere with the restoration process we all will undergo during that 1000 years. Entry into that 1000 year period is what Jesus promised a condemned man who also died on the same day as Jesus.

That we are Born-Again from the dead (Second Birth) with no sin on us, we will not grow old, get sick and die during that 1000 years on the earth. With Satan out of the way for that 1000 years, he will not be able to influence us to do bad. This future 1000 years will be a wonderful time for all of the human family. But evil will ascend out of the abyss at the end of the 1000 years.

And when the thousand years are expired, Satan shall be loosed out of his prison, And shall go out to deceive the nations which are in the four quarters of the earth, Gog, and Magog, to gather them together to battle: the number of whom is as the sand of the sea.

For 1000 years, the human family will have learned to be sinless and righteous before it's Creator. Now Satan is re-introduced back onto the earthly scene after the 1000 years.

In the future, after we are resurrected (Second Birth) , we will not be judged on anything we do during that 1000 years.

During our present existence (First Birth) and future Second Birth (Born Again from the dead) we cannot commit what is called the Unforgivable Sin.

It will be different when Satan is released from his prison after the 1000 years.

When Satan is unabyssed, and goes out to deceive the nations of people who are existing in their Second Births (been resurrected), we enter into a time period the Scriptures call the Last Days. The Last Days is an unspecified – but short – time period spanning from the time Satan is released from his prison to his destruction.

It is within this Last Day period that one can now commit the unforgivable sin. It is at this time that one can enter into the Second Death – a condition from which there is no return.

Individuals existing at that time in their Second Births (Life) will be tempted by Satan to do bad. Unfortunate for them, Scripture teaches that many will willingly and knowingly join Satan in a spiritual battle to oppose the coming of God's Kingdom to the earth from heaven. (Revelation 20:7-10)

Jesus had told Nicodemus that "Except a man be born again, he cannot see the kingdom of God."

Our resurrection from the dead will only allow us to see or discern God's Kingdom coming, not entering into it.  It's coming does not occur until after the 1000 years have ended and the Satan his rebellion and those who joined him are destroyed. revelation Chapter 21.

This Last Day time period – which begins with Satan's being released and ending with his destruction – is also called Judgment Day.

We are judged based on what we do within this relatively short time period. Again, it is only within this time period that we can commit a sin – make a decision – that will land us into a death that one cannot be resurrected from: The Lake of Fire, The Second Death, Non-Existence.

Having already been resurrected, living for 1000 years and restored to the condition Adam was in, we will know what God's requirements are before Satan is released. We will have no excuse for becoming unfaithful to God at that future time and the decisions we make to disobedience to God, we make knowingly and willingly. We cannot say at that time, "The Devil made me do it."

So The Lake of Fire is not a literal place. It is a symbol of non-existence.

Gehenna in Scripture was a garbage dump. It existed outside the city walls of Jerusalem and the fires were kept burning day and night. So at anytime, a person could throw their refuse over the wall and the fire would consume it and that refuse was gone – nonexistent.

Scripture no where teaches Eternal Torment or Eternal Punishment for the wicked as the church systems teach. Rather, the Scriptures teach Eternal Destruction. Notice how 2 Thessalonians 1:9 reads:

Who shall be punished with everlasting destruction from the presence of the Lord, and from the glory of his power;

Notice that the punishment is Everlasting Destruction – not being punished everlastingly.

The period in which wickedness will be assessed and judgment made to Everlasting Destruction (Non-Existence) will be after the 1000 years ends and Satan is released until his destruction.

Not one person today has been condemned to The Lake of Fire – The Second Death.

This judgment can only be made based on the behaviors and actions of persons within a future time period after the 1000 years.

At present, we are all flawed – by inherited sin – and God does not judge or condemn any of us under this condition. Jesus never condemned the sinner in his day. He forgave them.

Within our current First Birth states, none of us are to judge another, We are to do just as Jesus did, forgive and not condemn.