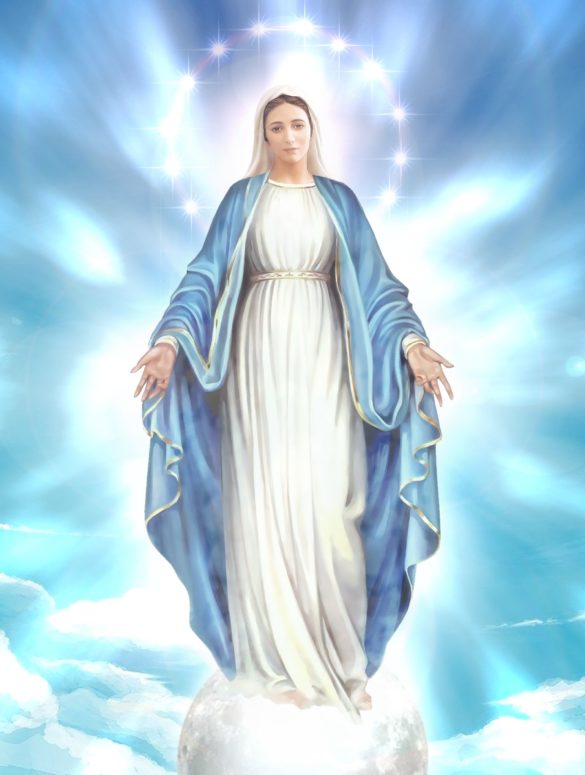 The answer to this question will surprise most. Many will not see the truth presented here. Some will see it, but something inside of them wars against them accepting it as the truth.

Just the other day, I was engaged in a conversation with an individual – a newly converted Seventh Day Adventist (the same individual who was so sure that John the Baptizer was Elijah (John 1:19-21), who assuredly stated that the Woman at Revelation 12:1-2 was The Church. (The Seventh Adventist Church) By the way, this is a popular – but false – teaching.

Can you say, “Someone or something is purposefully keeping the masses kindergarten-level and that someone and something is the religious system called by men, Christianity.

A great sign appeared in heaven: a woman clothed with the sun, with the moon under her feet and a crown of twelve stars on her head.  She was pregnant and cried out in pain as she was about to give birth.

So I asked my friend, “Where is the Church?”

He did not understand my question. So I stated, “The Church you and all Seventh Day Adventists attend is located on earth, correct?”

He frowned at the question but agreed. Then I stated, “Look at Revelation 12:1-2 and tell me where this woman is located?” He actually did not see it. (Or he did not want to see it). He had to go all of a sudden. But he had time to approach me to proclaim this Woman is his church!

Don’t run away, come back here …

The Woman is presented as a sign and she is seen in heaven. Notice what she is clothed in: The sun, which is a heavenly body.

Also, what do we see beneath her feet! The Moon! It too is a heavenly body.

Additionally, we see twelve stars – which are heavenly bodies – as a crown for her head.

This woman is not seen on earth, but in heaven. So who is she? That she is pregnant and about to give birth is a powerful clue.

First of all, we know that …

The Woman – the producer of something – is about to give birth. To what?

Its tail swept a third of the stars out of the sky and flung them to the earth. The dragon stood in front of the woman who was about to give birth, so that it might devour her child the moment he was born. (Revelation 12:4)

We must understand that there is one Creator of the heavens and the earth and that He created as His FIRST creation, His Son before anything else was created. (Col 1:15 and Rev 3:14)

Therefore, the Woman that we see in heaven is God’s Kingdom. God’s Kingdom is about to give birth to – or produce – a Son. Again, since this Son is not a literal flesh and blood Son, what is he?

The Son that will be produced out of God’s Kingdom is the promised God-given 1000 year Kingdom of Christ. It MUST precede God’s Kingdom coming down to the earth.

The pregnant woman is God’s kingdom. The Son that she is to produce is the promised 1000 year kingdom of Christ. She has not given birth yet. This event is many hundreds of years in the future.

What will be waiting to devour (overshadow) Christ’s kingdom of 1000 years is an enormous red dragon. This dragon is also a mother -of-sorts as it will produce on earth a rival kingdom.This mighty being is also seen in heaven. So if you think Satan is in some fiery place of torment, think again. He has to this very day, full access to the heavenly realm. Revelation 12:3 says of the dragon.

Then another sign appeared in heaven: an enormous red dragon with seven heads and ten horns and seven crowns on its heads. Its tail swept a third of the stars out of the sky and flung them to the earth. The dragon stood in front of the woman who was about to give birth, so that it might devour her child the moment he was born.

The stars that this dragon will hurl out of the sky to the earth are his angels. Contrary to what Christianity has been teaching about this mighty being, he still has great authority, even over the angels in heaven. Notice what Revelation 13:2 says about the authority and power this being still possesses:

The beast I saw resembled a leopard, but had feet like those of a bear and a mouth like that of a lion. The dragon gave the beast his power and his throne and great authority.

Notice that the dragon will give the [yet future] beast his power and his throne and his great authority. The beast will prove to be the rival system of governance over a future world on earth that will contend with the remaining faithful ones who were in Christs 1000 year kingdom and it will contend with the coming of God’s Kingdom down to the earth. A kingdom from below [the beast] will rise up against a kingdom that will come from above [God’s Kingdom]. (This is what Armageddon is).

By having him and his angels cast out of heaven and abyssing them for 1000 years. During that 1000 years, Christs kingdom will reign over the earth where he will prepare all of mankind since Adam (who will have been resurrected from the dead into his kingdom) to be qualified candidates for entry into God’s Kingdom when it comes down to the earth.

Yet, when Christ’s 1000 year kingdom ends, Satan is released from his prison (abyssing) and he is let loose upon a world of mankind that Christ had prepared as a chaste bride for membership (marriage) with God’s Kingdom when it comes.

At his releasing (after the 1000 years), Satan gives birth to the beast. This beast – as I stated earlier – will receive from Satan his power, his throne, and his great authority. That this beast receives a throne shows what it itself is: A throne or kingdom over the earth.

Since Satan will have long been cast out of heaven, his beast will not be of a heavenly source. It will be of the earth. The kingdom of the beast will be a paradise. It will be peaceful and safe. Yet, that is a part of the deception that is to come.

The people in those future days will give their allegiance, worship, and trust to it and view it as invincible. Revelation 13:4 reads:

People worshiped the dragon because he had given authority to the beast, and they also worshiped the beast and asked, “Who is like the beast? Who can wage war against it?

This kingdom will exist over the earth for quite a few years as it has to be established. It could be a kingdom of several hundred years.

It will be this kingdom that will mislead those coming out of Christs 1000 year kingdom previous and it will be highly successful in doing so. The numbers misled by this kingdom (beast) will be so numerous that they cannot be counted. That shows how powerful the adversary is and how encompassing his throne via the beast will be in the future. (Revelation 20:8)

Yet, the Woman seen in heaven is not the church as my friend claims, but it is God’s kingdom that will give birth to Christs 1000 year kingdom.

Note: The government or kingdom known as America has a mother. Who? Great Britain. So one can say that Great Britain gave birth to America.