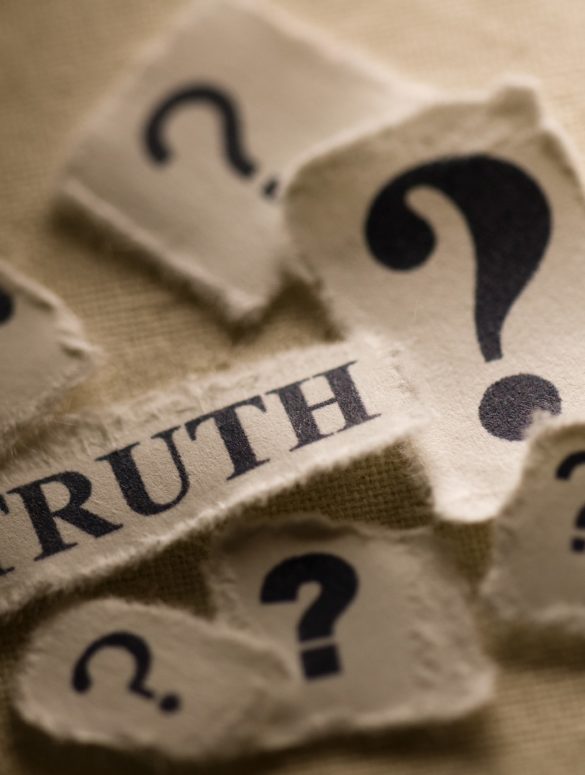 The Truth Is Not What They Want

In my wrtings, I have always maintained that the religious system called by men – Christianity – does not want the truth, does not wants others to know that truth, and neither does it teach the truth. It cannot afford to teach the truth because if it did, it would lose much of its membership.

With regards many of its members: Once one is a part of something and they become accustomed to it, they will naturally defend it from all who seek to poke at it to see what it really is: A gentle giant or a raging beast.

I was once a member of the religious system called by men – Christianity – for more than 45 years of my life. I know it and I know what it is. That was not always the case, though.

I was once a fundamentalist “born-again” Christian in my youth. Then later a Jehovah’s Witness for thirty years of my life. I took upon myself titles neither God or Christ told me to take. I even called myself a Christian, something Christ never commanded either.

I accepted without question everything I was told by the men who stood on the pulpit. I believed them. I believed what was written in the literature they gave to me. I dared not question – but defended – the teachings, the images of Adam, Eve, angels, God, Jesus and others as persons somehow as persons of European descent even though something deep within the recesses of my mind knew something was not quite right about it. But I did not question anything because no one else around me did and I wanted to fit into the so-called spiritual family. (Thus, the power of the group dyanamic and the blind leading the blind).

I thought Christianity was the true religion and that it was my duty to assist in the effort to convert all that I met in the world to Christianity. Boy was I wrong!

I realized Christ did not commission anyone to go out and make Christians of anyone! He never used the expression Christians and neither did his disciples. Rather, Christ said to go out into the world and make disciples to him, not Christians or Jehovah’s Witnesses or Catholics or Seventh Day Adventists or any of the other religious groups. It was the European man who set up this system and established the rules and told all of the world to be called Christians. I came to understand that being a Christian was synonomous with joining one of the many denominations within that religious system. Therein lied the real danger and controlling influence over individuals

I thought this giant called by men Christianity was gentle and kind and good. But in reality, it was (and is) a raging wild beast that seeks out men and women to devour them into its teaching. Once devoured and within its belly (membership), the person is controlled and prevented from escaping from the belly.

Only the sharp two-edged sword (Christs teachings) can split open the belly of the beast to provide escape from it. (Revelation 1:16)

Yet, I began to poke within the belly of this wild beast called Christianity when I was a member. My pokings were questionings and challenges and investigations into its teachings and practices. I became a pain within its belly; a stomach ache, if you will.

To sooth its pain, it would send me its ministers in an attempt to “show me the error of my ways and thinking” but it did not work The more it spoke the more pain it suffered because of my responses. Like the natural body that seeks to expel a foreign object from its belly, Christianity had no choice but to open its mouth to either vomit me out from it (excommunication or disfellowshipment) or allow me to walk out under my own steam. I walked out under my own steam and when I walked out it closed its mouth tight.

I looked back at it and looked into its eyes and without a word, it knew I knew who and what it is and that I would do all I could to tell all of the world who it is: An imposter – the foretold imposter – and counterfeit pretending to be of God and Christ. (Matthew 24:4-5)

Why did it close its mouth tight upon my departure? Well, it was not to prevent me from going back in, but to prevent others from hearing the truth and thus becoming “a belly ache” and escaping out from it. When Christianity devours and consumes, it devours and consumes and it has no intentions of releasing those within its power and control without resistance.

When the religious system called by men Christianity opens it mouth to speak, it spews out rivers of lies in order to flood and saturate the ground of the earth with its lying teachings. As a result, there is largely no truth in the earth regarding God and Christ. There is lots of talk from the pulpit, but no truth spoken.

If one listens to the many of those claiming to be followers of Christ as a result of being membered with “Christianity,” something is not quite right with them. They sound like and look like they have a mental impairment. A mental sickness. Many simply cannot be reasoned with. They are largely an emotional mess. I know what has made them that way: Christianity has bred this mental sickness and impairment.

My point here is that the truth about God and Christ is rejected by Christianity. They have even devised clever ways to rationalize their lying teachings in opposition to Christs teachings inspite of what Christ taught! Their rational ranges from consulting doctrines of men to outright placing a foul stench upon the ones bearing the truth about Christ.

One individual I spoke to recently on my YouTube channel could not deal with the sayings of Christ. He claims to be a follower of Christ. Instead of addressing what Christ said, he began attacking me personally (like a wild beast goes on the attack) and rambling on about I need to get baptized in water and get born-again and speaking many words that had no substance or meaning. This is the mental impairment and unreasonableness I referred to earlier. He could not tell me what getting baptized in water would do, what born-again is, and he never mentioned Christs baptism and why it should be the baptism all who would be his followers would want. He sounded like a drunk person!

What is sad is that many of those who are in captivity to Christianity is that to this day, they attempt to bring me back into that “mess” and confusion. And I reject their efforts. Since my departure out of the belly of the beast, I have never felt more liberated to worhip my Creator and serve my Master than I do now.

I don’t have a religious organization telling me who I can or cannot speak to; what I can or cannot read; what and how and am to believe in God and Christ; and how to worship God. I now understand the freedom Christ spoke of.

We were not created wild animals to be tamed and domesticated. Even a wild horse when captured seeks to escape back into its natural environment. Likewise, there is something inside of us that knows that we have a Creator and that he made us to be free, not to be enslaved. Christianity and indeed all religious systems are enslavers of men.

In this wicked, corrupt and lying world, one coming along speaking the truth is made into a criminal “of the world” and executed. That person was The Son of God. This world spewed him out and put him to death.

Jesus told his followers essentially “if they did it to me, they will do it to you.” His words at Matthew 24:9 says:

Then people will deliver YOU up to tribulation and will kill YOU, and YOU will be objects of hatred by all the nations on account of my name.

One should keep in mind WHO delivered Chrst up to tribulation and his eventual death: It was a religious system! The very religious system Jesus exposed as a liar, a hypocrite and a controller of men.

Likewise, it will be a religious system (indeed, a religious world), that will deliver up Christs true followers and have them put to death as well.

Christianity as a religious system as already showed its true bloody colors and what it is capable of doing to the human family. Christianity loves to present itself as clean and chaste, but history shows it is anything but. Even today, those nations claiming to be “Christian” continue to spill the blood of millions of innocent human beings. Rather than being moral voices against war, it supports war. Does that sound like something that would come from Christ?

Yet, there are those who are membered with Christianity on the prowl and seeking to get others to think as it does and to join them! Anyone joining them is not following Christ, they are following “religious organizations.” They will walk right into the belly of the beast and trapped within its belly.

When the man Jonah was released from the belly of the great fish, he was no longer a captive. Did Jonah seek out another fish to enter its belly? No! Jonah appreciated his freedom.

Yet, today millions feel safe being a captive. They feel good to eat what the beast eats and reguritates and gives them. They do not eat food (teachings) unless it has been adulterated (chewed up) by the beast of Christianity.

It is like this: Christs teachings of truth never reach those within the belly of Christianity. Why? Because Christianity – the ravenous beast that it is – will rip apart Christs teachings and chew it up and THEN feed it to those in its belly. Thus, its members receive an adulterated and tainted teaching. A teaching that has been changed and thus not the truth.

I used to be appalled at the extent the religious system called by men, Christianity, would go to promote what is nonsense and not true. And, not only that, but to prevent the truth from being known.

Why do you think it has cleverly inserted itself in between mankind and God, to block knowing of the truth. See below: 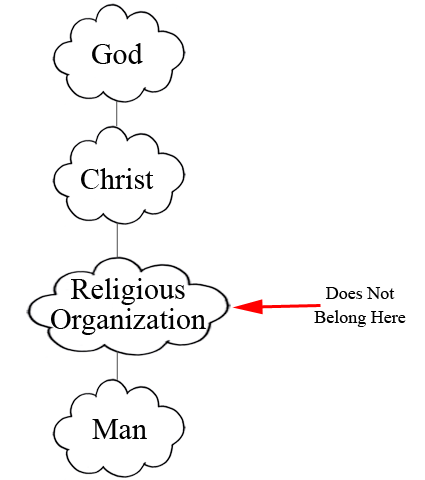 Rather, the image below shows the true arrangement. This is backed up by that fact that Christ is the truth and mankinds only Master, Head and Master. (1 Cor 11:3) 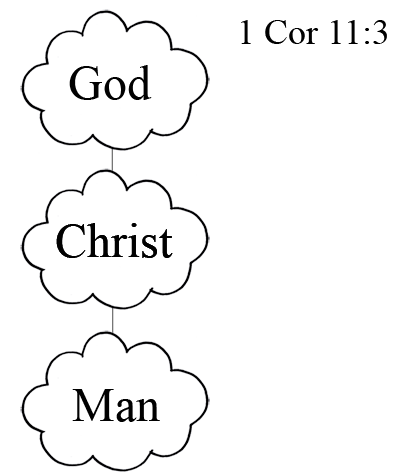 The religous system called by men, Christianity, stands to feed the masses lies about God and Christ and to shut up the Kingdom of the Heavens and prevent mankind from interfacing with its true and only Teacher.