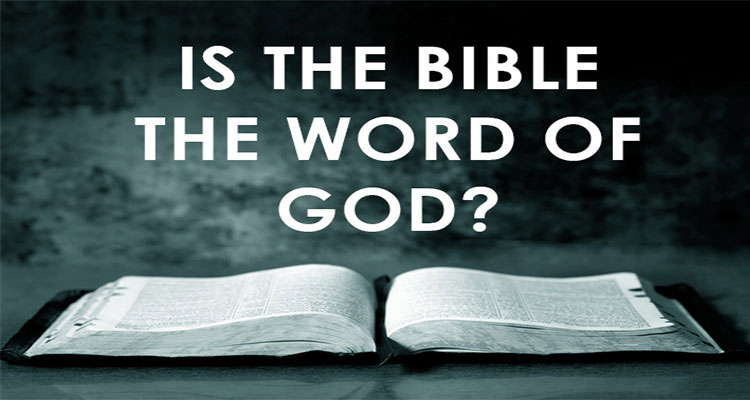 The Teachings of The Bible or Jesus Christ

It seems that “The Bible” has taken preference over Jesus’ teachings.

This is a subtle thing. A book now is looked to as “The Word” and it is to be studied. The Most High God Himself says this at Luke 9:35:

We are to listen to a real living person: The Son of God.

Do not get me wrong, I not saying that “The Bible” should not be read or even studied. WHAT I AM SAYING is that it should not be placed on the same keel as Jesus Christ, who is The Word of God.

It is men who compiled this book and it is men who gave it the name “The Bible.” It was an emperor (a politician, Constantine) in the 4th century who dictated to feuding Bishops at the Council of Nicaea how it was to be believed doctrinally.

The reason why there is so much confusion in the world today as it relates to what men call “Christianity” is because of the assumption that “The Bible” is the word of God. These persons go to the Bible, as a whole, and say “the Bible says this and the Bible says that” when they should be saying (and thinking) “Jesus says this and Jesus says that.”

Jesus, at Matthew 5:21-48 showed that the “old” way of thinking and believing was no longer in force. It was “his teachings and what he says” is what one is to believe.

To be fed in a spiritual way and to mature into solid knowledgeable followers of the Master (Christ) involves (1) Listening to him as God directed us to and we that by reading and meditating upon what he said and what he taught his disciples. And (2), asking God in prayer (through the Christ) for wisdom and understanding. These things can only come from the Father in heaven through the person of Christ – not a book men call “The Bible.”

Jesus – the person – is the way, the truth, and the life. Not a book, a human or human agency such as religious organizations.

What many have failed to do is do what Jesus did time and time again: Withdrew to a private place and engaged in prayer to his Father in heaven. This is how we receive wisdom and understanding from Him through the person Christ Jesus.

But no! People are being misled that it is a book (The Bible) by and through which we receive such wisdom and understanding. It is through Christ that we receive these things.

When a book, human or human agency shares a position that is only given to Jesus Christ, then that “entity” stands in a position it should not be and becomes an object of reverence. And, that is exactly how the Bible is viewed.

So when I saw the title of this thread, “What are some of your bible studying methods?” and the thread initiator mention the Bible as “the word” I thought to myself, why is Jesus not being listened to as the ONLY and EXCLUSIVE word and why are many making the assumption that “The Bible” is the word?

It is “faith” we are to build up. faith cannot be built up without their first being knowledge. That knowledge is NOT a knowledge of “The Bible.” But rather, a knowledge of both the Father and Son. Jesus says at John 17:3:

Now this is eternal life: that they KNOW you, the only true God, and Jesus Christ, whom you have sent.

Are we to believe that a book men call “The Bible” gives this knowledge of The Father? Jesus said that he (the person) is the one who does this. Consider the following Scriptures:

No one has ever seen God, but the one and only Son, who is himself God and is in closest relationship with the Father, has made him known. (John 1:18) (NIV)

There is no mention here of a book, a human or human agency making the Father known or being the instrument of truth or life or being the way to the Father. ONLY through the person of Jesus.

This pattern of holding up a book as “holy” and as “the word” fits no pattern in past times in Jesus’ day or during the times of the apostles after Jesus ascended into heaven. There was no book that contained his teachings. What was spoken by the apostles to others they were commissioned by Christ to teach (Matthew 28:19-20) was by word of mouth, not by printed page.

Now all of a sudden comes the 4th century and a book given the name by men replaces that?

What has occurred today is a reliance on words one can see rather than those they cannot see. Jesus still speaks and he still teaches. He is The Word of God and it is by God’s power (Holy Spirit) that we can hear Jesus’ words and be taught by him and through him receive Holy Spirit which enables us to be ready containers for what we should be asking from the Father: His wisdom and understanding. Things that are good for us and no loving Father would withhold from those who love Him. (Proverbs 4:5-9, Proverbs 2:1-3, Proverbs 1:1-4, Proverbs 9:10, Exod 31:3).

Reliance on words written (The Bible) does not build up the kind of faith God requires we have. It builds up a pseudo-faith. It makes one reliant on what “The Bible” says as opposed to what “Jesus says.”

If that reliance is in a book, then how can faith be built upon the person who IS The Word of God?

No, do not throw your Bibles away or burn them. But place it in the proper perspective: It is NOT The Word of God, Jesus is. Jesus is The Word of God (God’s spokesman) whom we are to listen to, not a book men themselves have given that title too.