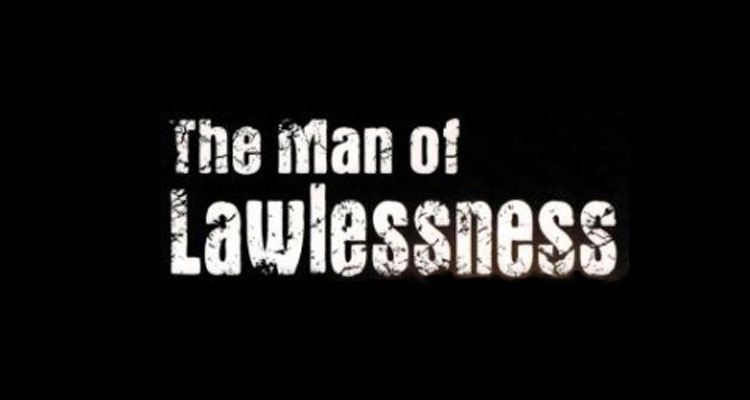 The Man of Lawlessness

Everything The Most High God, His Son, The Prophets and The Apostles said with regards lawlessness was tied in closely with teaching something contrary what God relayed to be taught and explained through those persons.

Today, lawlessness is closely tied into disobedience to God and His Son and things taught contrary to what Christ taught.

A feature that precedes the arrival of The Messiah is the revealing of who Scriptures calls “the man of lawlessness.”

Don’t let anyone deceive you in any way, for (that day will not come) until the rebellion occurs and the man of lawlessness is revealed, the man doomed to destruction. He will oppose and will exalt himself over everything that is called God or is worshiped, so that he sets himself up in God’s temple, proclaiming himself to be God. Don’t you remember that when I was with you I used to tell you these things? (2 Thessalonians 2:3-5)

The Apostle Paul also linked the arrival of this “Man of Lawlessness” to Jesus’ arrival and the “Harvest” or gathering of himself and others to him. (This harvest is a future event, so we have two applications of The Man of Lawlessness)

Concerning the coming of our Lord Jesus Christ and our being gathered to him, we ask you, brothers, not to become easily unsettled or alarmed by some prophecy, report or letter supposed to have come from us, saying that the day of the Lord has already come. (2 Thessalonians 2:3-5)

Who today is expressing today via literature and talks that “The day of the Lord has already come?” The Watch Tower Bible and Tract Society.

They identify the year 1914 has that pivotal date that God’s Kingdom was established; that “The Appointed Times of the Nations” ended in that year; that we are now living in the time period that Scriptures call the “Last Days”; that Jesus is now actively ruling as earth’s King; and that Jesus’ presence among his faithful followers occurred in that year.

It was the Watch Tower Bible and Tract Society who announced that the year 1975 would bring the end of the world. Well, 1975 came and went without event. Thus showing the danger of engagement in establishing dates and publishing and announcing prophetic reports such as it does easily unsettle persons and then makes for a hard crash when they go unfulfilled.

It is not just the Watch Tower Bible and Tract Society who engages in time-prophecy and putting dates on things, almost all religious organization claiming to be of Christ does this. So, this “Man of Lawlessness” that the Apostle Paul spoke of would not be some singular influential “Antichrist”, but a system of human agency that will oppose and exalt itself over everything that is called God or is worshiped. Not only that, it will set itself up in God’s temple proclaiming himself to be God or LORD.

That is, it would lord over others as if it has God-given authority to do so.

Opposition To Everything That is Called God

How can someone or something be in opposition to everything that is called God or is worshiped? By usurping the things that God has established and put in place.

If human agencies – namely, religious organization – sets itself in a position to act as a mediator between man and God and sets up a system of elaborate rules and regulations that it binds it’s membership to, it becomes the lawgiver, not God.

This is precisely what all religious organization has done in the world today. It has also been clever in this ruse because it has been able to convince its membership that God endorses it.

The effect is that religious organization is calling all of the shots and issuing acceptance, reward, punishment, banishment, and condemnation of sheep that are not theirs.

Noteworthy is how one becomes a member of the Watch Tower Bible and Tract Society ( a Jehovah’s Witness). After studying from their many publications for a span of time with a qualified and experienced person, a new convert will undergo a public baptism ceremony in dedication of his life to Jehovah’s service. But is it really in service to Jehovah or an organization. Let the reader decide.

I have reproduced word for word the baptismal vow all candidates desiring to become a Jehovah’s Witness must take. It is taken from the June 1, 1985, Watchtower, page 30:

On the basis of the sacrifice of Jesus Christ, have you repented of your sins and dedicated yourself to Jehovah to do his will?

If one notices the second part of the baptismal vow, notice to who one is really dedicating their lives to? It is to God’s spirit-directed organization.
It has become very easy for religious organizations in the world to self-proclaim themselves as from God.
What is more disconcerting about the vow is the subtle ownership that the Watch Tower organization takes of Jesus’ sheep. Notice that the Watch Tower organization is actually dictating who and who is not a servant of Jehovah. How?
By saying that one is a servant of Jehovah only in association with God’s spirit-directed organization. Therefore, if you voluntary leave the organization or are put out of it, you are no longer a servant of Jehovah. Trust me, in either case – leaving or being put out – you are viewed as an “outsider” by the organization.
The question that now presents itself is: “Who has authorized humans or human agencies to treat and do as they please to sheep that belong only to Christ? Did not Christ say at Matthew 7:21-23 that he will be the one recognizing those who are not his own? What would arrogate any human or human agency to act as if they are the master of the Master’s household?”
Answer: The Man of Lawlessness and those Scripture calls Antichrists.
I know for a fact that within the Watch Tower organization there are many fine and good and upstanding persons. Many of them are good fathers, mothers, sons, daughters, and employees. However, this is true of some of the membership of any religious group.
The problem with religious organization – and in particular the Watch Tower organization – is that it establishes itself as “The Truth.” Why do I say this? Listen to any Jehovah’ Witness in conversation and you will hear them use the phrase “In the truth.” Such as, “We are in the truth.” Or, “Are you in the truth?” What do they mean by this?
What they are saying is that by virtue of their being members of the Watch Tower Bible and Tract Society, they exist within the organization that has the truth. There is no other. Therefore, what they are saying is that the organization itself is “The Truth.” They even say that the organization itself is “Jehovah’s Earthly Organization.” They are sincere in their belief in this.
So what has really happened here in a subtle way? A human agency has set itself up in “holy” place that does not belong to it. How?
Firstly, it has taken ownership of sheep that are not theirs to own. It encloses them within a sheep pen of its own rules and regulations and punishes any sheep that does not behave itself within the pen or attempts to stray outside the pen. Even if sheep hears a familiar voice calling to it outside the pen. (John 10:3-6)

Secondly, it has usurped a title that belongs to Jesus only. At John 14:6, Jesus said:

Jesus says that he is the truth. If anyone is to believe that they are “In the truth” that belief should be that they are in Jesus; that is, have a belief and following in him and his teachings – not an organization claiming that it is “the truth.”
Jesus said that he is the way. The Watch Tower says that they are the way. This too is implied in the Watch Tower baptismal vow. That the way to Jehovah is only through this ” spirit-directed organization” One can go nowhere else.
Jesus said that he is the life. The Watch Tower says that they are the life. They claim that all within its membership exists in a spiritual paradise even now.
Thus, religious organization standing in a position – a holy position –  only Jesus can stand. It is in this manner that the Man of Lawlessness opposes everything that is called God. It places itself in a holy position where only Jesus can stand. A position that God placed the Christ in. Any human or human agency that usurps that position, exalts itself over everything that is called God.
What is true, is that one cannot go to any religious organization on earth to find the truth, and the way, and the life. Recognition must be to Jesus and him only.
This article should not be interpreted as to apply exclusively to The Watch Tower organization but to all religious organization who in their own way control and hold captive sheep that are not theirs.

All religious organization represents this Man of Lawlessness. Notice what Jesus said at Matthew 7:21-23:

So these workers of lawlessness are men. More so, they are persons claiming to be followers of Christ.
So the Man of Lawlessness are humans and human agencies convinced that they are his followers and doing what they feel is right and proper; human agencies who position themselves in authoritative and headship positions over others: A position that belongs only to Christ. (1 Cor 11:3)