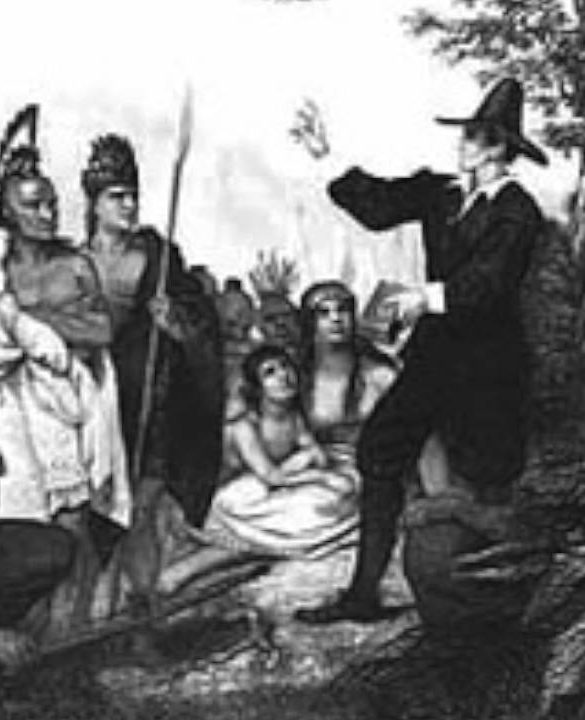 Before his ascension back into heaven, the Son of God left his followers with a simple command. That command is found at Matthew 28:19-20. He commands:

The disciple-making work was simply a teaching to others what Jesus taught. One would first have to become a disciple of Christ knowing his teachings before he or she could teach others and they in turn teach others. Yet, there have been – and still are – elements within the religious system called by men, Christianity,  who have acted dishonorably and lyingly in the disciple-making work. This brings into question whether these persons truly understood Christs teachings themselves.

I present to you the case of the Panare Indian. This case shows the extent those zealous to convert men and women to Christianity will go. History has seen The Crusades, The Spanish Inquisition, The African Slave Trade and the influx of  armies of so-called Christian Missionaries into non-White lands to impose upon and convert persons to Christianity. The African Slave Trade resulted in millions of African Americans who have had – through the generations – their African names and identities taken and eroded away and a European identity and religion imposed upon them. This silent invasion by Christianity into non-White lands is still going on.

In Africa, for example, there are over 150 million Catholics who look upon the Pope as a moral authority. Myself, a person of African descent who is an American citizen, find it strange that dark-skinned people revere, fear and idolize a White man and view him as a moral authority. Yet, I have come to realize that this is exactly the goal Christianity seeks to accomplish in the world: To convert people of color so that they view the man of European descent as a moral authority, as righteous, as clean, as chosen by God, and as having all of the answers. Conversion to Christianity brings one under the power and control of the man of European descent. Many people would say that I am blowing smoke but I submit them why are images of Adam and Eve, Angels, Jesus, Moses, Noah, The Prophets, The Apostles and others portrayed in art, film and literature as persons of European descent? They have no answer. Instead, they react emotionally and out of hatred because the question is raised.

Yet, the case of the Panare Indian is powerful evidence to show to what extent Christianity will go to convert persons.

In the mid 1970s, Christian Missionaries entered into the Colorado Valley and encountered unique and peaceful resident Indians there called the Panare. The Panare were a simple people who lived off of the land and who stayed to themselves. They had no radios, TVs, electricity or any of the modern conveniences many today enjoy. The interesting thing about the Panare Indian is that they had no concept of guilt and sin.

Well, these Christian Missionaries were unable to convince the Panare Indian to accept faith in Jesus Christ. So to overcome the problem, these missionaries came up with an ingenious and underhanded solution! With the authority and permission of the Catholic Church, they created a special New Testament just for the Panare. And, in that Panare Bible, they say that the Panare Indian brutally killed Jesus. Not present in this new Panare Bible was the betrayal of Jesus by Judas, the Romans, the trial and Pontius Pilate.

The Panare Bible read at one place:

The Panare killed Jesus Christ, because they were wicked. Let’s kill Jesus Christ, said the Panare… They laid a cross on the ground…”  “God will burn you all… God will exterminate the Panare by throwing them on the fire… ‘Do you want to be roasted in the fire?’ asks God. ‘Do you have something to pay me with so that I won’t roast you in the fire? What is it you’re going to pay me?'”

So you see, where no guilt existed before, these Christian missionaries implanted it. I cannot help but think that this is the same tactic the Serpent used on the woman Eve in the Garden of Eden. He implanted a thought. And, when the woman gave her husband Adam some of that thought (fruit), Adam ate (digested) it and then felt guilty about being naked. (Genesis 3:8-13)

I don’t want to burn in the big fire. I love Jesus.

This event is documented in the book The Missionaries: God Against The Indians by Norman Lewis, Arena 1989, pp. 188-192.

Threat of eternal damnation and torment in a eternal fire is a cowardly and unloving act and practice that is still being engaged in today by the religious system called by men, Christianity, to scare people into repentance and into joining this system of religion. That is ashame.

The very idea and thought of punishing and roasting people in an eternal fire is something The Most High God NEVER conceived of or even entered into his mind. This is written at Jeremiah 7:31:

They have built the high places of Topheth in the Valley of Ben Hinnom to burn their sons and daughters in the fire—something I did not command, nor did it enter my mind.

I have engaged in discussions with many so-called Christians from the many denominations and many of them see nothing wrong with any of it. One person felt that some “good came out of it” because the Indians attained salvation in Jesus Christ.

It is such a mentality that I find extremely disturbing. It tells me that they would be willing to lie to others if that is what it would take to convert them. The act of blinding someone is bestowing lies upon them.

Today, the religious system called by men – Christianity – is the biggest liar and misleader of mankind. It’s violent history is evidence of this. I believe that it – as a system of religion – is the foretold misleader Jesus said that would come on the basis of his name acknowledging that he is the Christ, but would mislead many.

This imposter and counterfiet stands poised like a venomous snake ready to strike at anyone who questions or challenges it’s self-imposed authority.

Watch yourselves, it is not of God and Christ.

That is one of the reasons why I have created e-Prophetic.com. It’s aim to to show what the religious system called and named by men – Christianity – really is. My aim is also to direct persons away from religious organization of all sorts and to the person of Christ himself to be his disciple. (John 8:31-32) NO RELIGIOUS ORGANIZATION AFFILIATION NEEDED. Christ never directed his disciples to create religious systems or organizations and to go into them. Such is the machinations of men. Notice that it is men – not God and Christ – who are telling everyone that they MUST join or affiliate with some religious organization in order to attain salvation because Christ is with them. Do not believe it.

At that time if anyone says to you, ‘Look, here is the Messiah!’ or, ‘There he is!’ do not believe it. For false messiahs and false prophets will appear and perform great signs and wonders to deceive, if possible, even the elect. See, I have told you ahead of time. “So if anyone tells you, ‘There he is, out in the wilderness,’ do not go out; or, ‘Here he is, in the inner rooms,’ do not believe it. For as lightning that comes from the east is visible even in the west, so will be the coming of the Son of Man. Wherever there is a carcass, there the vultures will gather.

This teaches us that Christ is NOT within anything on earth. He has not come yet. When he does arrive, it will be evident to all – all at once – where he is.

It is too bad that the Panare Indian and so many others have been ensnared and taken into captivity by the liar, impostor, counterfeit, misleader, opposer of Christ, and great deceiver of mankind – Christianity.

Dear reader, I beg you and caution you, look intently at this religious system. Look how divided it is. (More than 41,000 contending denominations). Look at it’s violent past and it’s acts in recent times. Do you really think it comes from our Creator?

Dear reader, I do not ask that you believe me. I am no one. Approach God in prayer as Christ directed us through him and ask God for his Wisdom, Understanding and Knowledge in such things. Expect a loving Father to answer you in the SAME MANNER that you asked Him: Through His Son. God does not speak to us through the printed page; He speaks to us through His Son. If we think God speaks to us through a book called the Bible (or any other book men say is holy), then that is ANOTHER WAY. Jesus said at John 14:6 that:

For those of you who say, “Well, how else can I learn about Christ if I do not read the Bible?” I say to you, you still don’t get it. You ask God in prayer through His Son and God gives to you through his Son. It is the Bible and NOT ASKING GOD THROUGH CHRIST is where many go wrong. It shows a lack of faith when one relies on a book to learn about God and Christ. No book can contain the knowledge and wisdom of God. Yet, that wisdom and knowledge flowing from the Father through His Son directly to us far far exceeds anything that the Bible can provide for us. But it takes faith to rely on that which one cannot see. (Hebrews 11:1). A book one can see.

It is a faithless person, a faithless religious system and a faithless generation that relies on a book -rather than the person of Christ –  to approach God and learn about Christ. Put your faith in God and His Christ. Not a book. (John 14:6)