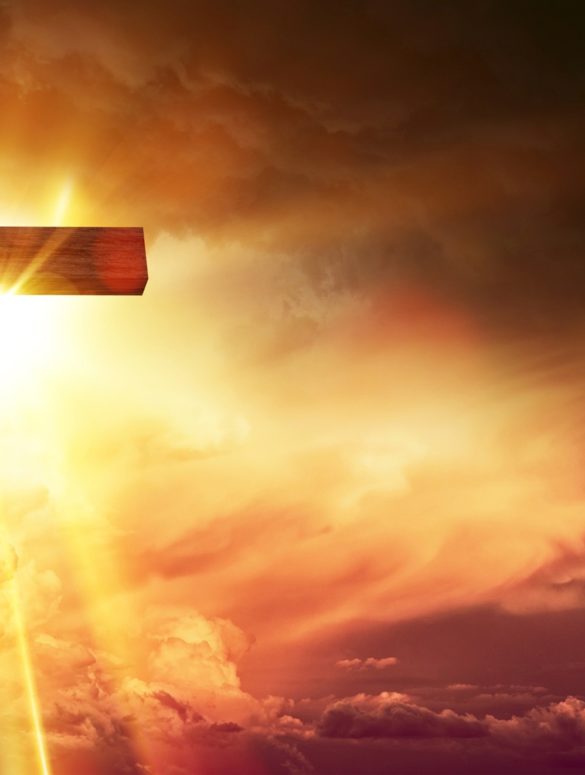 What Really Is Christianity?

Christianity, as an expression, is a made up expression. A group of European men decided that the teachings of Christ will be called Christianity and those who are members will be called Christians. It is that simple.  When on earth, Christ never left instructions to anyone that his teachings would be made into a religion and given a name. And of course these men waited until the Master ascended into heaven and they waited until the last restraint – the last Apostle-  died to establish their system of religion through which they could mislead and deceive the entire world.

Falsehood fears truth. It runs from it like scattering roaches when a light switch is turned on. The religious organization and its membership may – either by aggressive or devious means – try to blot out the revealing light of the truth and prevent others from being bathed in it. It has always evaded meeting the truth face to face in honest contest.

So why are so many people today calling themselves by titles that Christ never used, knew of or commanded? In fact, mankind has gone above and beyond just the expression Christians, they have concocted hundreds of additional titles such as Jehovah’s Witnesses, Mormons, Catholics, Seventh Day Adventist, Lutheran, etc. Each claim they are Christian. Each teach Christ differently. Each contend with one another over who has the “right religion.” And, the people stand before them all weighing and deciding for themselves which one is the “right religion.” Once a decision is made, they join that religious organization and adopt what it teaches.

Yet, few stop to think whether or not Christ told anyone to create these religions. The answer is no! Christ never left any instructions that – upon his ascension – that religious organizations where to be created. And, if one really thinks about it – and supposing that he did – look at the mess Christianity is in. It contains more than 41,000 contending denominations. Each teaching Christ differently and each claiming to have the truth and being the “right religion.” The Son of God would have known that establishing a religious system called Christianity (or by any name) would cause these divisions. Thus, he did not. Gods Son came to establish a Brotherhood, not a religious system. There is nothing Brotherly about the religious system called by men, Christianity. It has a heinous history of mistreatment, murder, and domination of God’s creation, man. Its present treatment of the human family has not been stellar either. It is not from God or Christ. It is from men.

Logic should tell one that Christ would not have told anyone to create a religious system called by men Christianity. Men created it and it is men who stood it up as something godly. When within her, there is nothing but evil lurking.

I am amazed at those individuals who are members of some organization within Christendom who will say, “Yes, I agree, Christianity has its problems, but MY CHURCH does not do those bad things.” Those individuals are sticking their heads in the sand and not seeing the much bigger picture that they members of a parent religious system. They are the children organization. Their mother is Christianity. So one should not justify remaining in it because their individual church that they are members of do not practice those things.

What Is Christianity, Really?

Christianity is a Euro-Gentile, Greco-Roman psycho-philosophical vehicle of spiritual and intellectual enslavement which has as its end:

​Christianity is really all about conquering and controlling individuals. And, this is the reason why it is an impostor. Christ said of those who would be his disciples would be free persons, not enslaved persons. John 8:31-32 reads:

To the Jews who had believed him, Jesus said, “If you hold to my teaching, you are really my disciples. Then you will know the truth, and the truth will set you free.”

I know this freedom and I know what it feels like. Those within the religious system called and created by men – Christianity – conform to a set of rules, regulations, practices and rituals, and beliefs prescribed for them. If they fail adhere to them, they could be punished.

For example, I know when I was one of Jehovah’s Witnesses for more than 25 years of my life, I would told what I could read, what I could not read, who I could associate with and who I could not associate with, what to say to the persons I spoke to about “The Bible,” what publications to read and when to read them, when to attend the meetings, how many hours I had to spend each month in what is called the “Field Ministry,” how I was to dress (as a Anglo), and what image I was to portray before the unbelieving public (again, a clean-cut Anglo). Failure to question or challenge any teaching, procedure, or decorum would get you in hot water with the Watch Tower authority and get you expelled. I never let that happen, I left the organization quietly by dissassociation (Vountarily leaving and renouncing my membership).

Christianity in all forms is burdensome and has the face of the Euro-Gentile-Greco-Roman. This is evident by the portrayals of Adam, Eve, Angels, Jesus, The Prophets, The Apostles and others in their likeness. This has not changed and it will not until God and Christ exposes it.

Christianity is anything but lamb-like. I know that Jehovah’s Witness claim that they are always being persecuted everywhere in the world because of their stand. I used to believe that to. But I realized that people of all sorts – religious and non-religious – suffer terribly at the hands of dictatoship governments and even at the hands of nations who claim “In God We Trist.”

Jehovah’s Witnesses are masters at portraying themselves as victims. This is a really strange thing to see. It is almost as if they want to be victims so that they can have a self-fulfilled prophecy. I know persons who are Jehovah’s Witnesses who NEVER admit to being the person initiating a wrong against another. They focus on the wronged persons response and say, “See there, I am being persecuted.”

Yet, all of Christianity is a war against anything or anyone who is against what it says.

I know that among my people – Black people – Christianity was “assigned” to us, and I find it very odd that those who assigned it (imposed it) do not want any of us – persons like myself – to challenge or question it. It insists on being believed and accepted without question, challenge or investigation.

I also know that White people (good, bad, sincere, not so sincere) have no appreciation or sensitivity as to how it feels to have the images of the persons I mentioned above presented constantly and in large doses as persons of European descent. When they see them, there is nothing within them that would prompt them to say, “There is something wrong with this.” (Unless the tables were turned and all of those persons where portrayed as dark-skinned persons. Then I am sure they would cry out and say something). But there is a deafening silence to persons of color acceptance of these portrayals.

A new major motion picture called the Son of God hits the big screen on February 28, 2014.

The actor chosen to play the part of Jesus is a White man. In fact, all of the characters in this movie are White persons.

What this is, is another bold attempt by Christianity to implant in the minds of all persons the subliminal idea Jesus was a White man. More dangerously and sinister is the signal it sends to the rest of the world, particularly people of color: The deification of White people.

Look at the images below. Can the producers of this movie be so blind and insensitive to want people of color to accept this? No one has ever seen Jesus today to portray him in the likeness of any race of mankind. Besides, at present, Christ is not a man. He is in heaven and invisible to us. 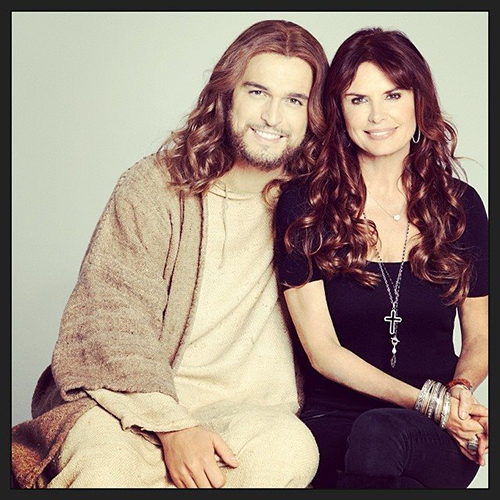 The photograph above is appalling! What power would possess someone to portray The Son of God in this manner? This is nothing but the deification of a particular race among the human family.
“The cultural and racial superiority of the people who created it.”

Look at how Satan is portrayed in the movie below! While the devil is invisible and cannot be seen, he is portrayed as an Obama-look-alike! This is shameful. Was this was by design? This also shows the evils of Christianity and how it views people of color.  It also shows a woeful ignorance of God and Christ by those who produced the movie. There true agenda is apparently money. This is nothing new. They are simply doing what the TV evangelizers are doing to rake it in: Employ use of emotionalism to drunken the viewers.

I might add that the Devils  beauty is compared to precious stones in “The Bible.” (Ezekiel 28:12-15)

Someone raised their voice about it and the movie producers promised to cut the scenes portraying the Devil as “The President.” Yet, no thought of cutting the scenes because it is portraying the Devil as a “Black man!”  Jesus is portrayed as a White man and the Devil as a Black man.  Yet, few raise their voices in protest at these false and misleading portrayals. Those who do are looked upon in disdain. Think Christianity is not insensitive, intolerant, hateful, deceptive and evil? Think again. 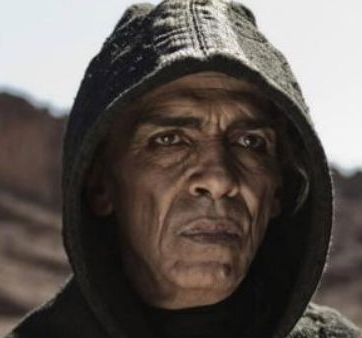 So the above image is how those who created christianity want to implant in the minds of the masses. No longer the other false dressed-in- red-with-pitch-fork-image. “People of color are evil” is the message this image sends.

Movies such as this play into the larger role of misleading the entire world. And, this is in keeping with Christianity’s pattern and agenda all along.  While I will never view such a disrespectful and blasphemous movie, I guarantee you what will be featured more than anything else is emotionalism. I know that if Christianity can get you emotionally drunk, it has you. You will cast off reason, rationale and clear thinking. In this movie there will be lots of crying and emotionalism going on and this is what will hypnotize the viewers. That way when the movie is over, people will walk out emotionally drugged and ready to join a church – with images of a White Jesus – to receive more of the drug of emotion.

They will have been captured and enslaved.

This is to my Black Brothers and Sisters: Wake up and do not buy into this. Why are YOU not questioning this? What are YOU afraid of? Do you really believe Jesus looked like this? And, what of Christs stationing now? Do YOU believe this is what he looks like at present?

The Master is in heaven and stands next to his Father in heaven. Both are invisible. (Col 1:15)

Wake up! Christianity is the greatest misleader of mankind ever to exist on this planet.

This movie – and the many like it in the past – is powerful proof of that.

Christianity seeks only to lead persons into it; into any one of its many denominations. 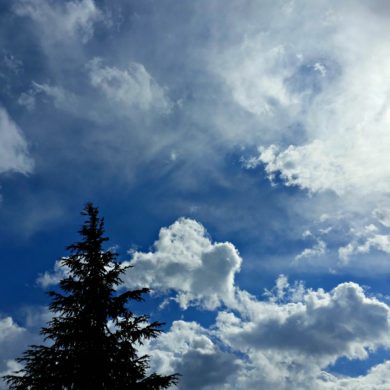 Has The Bible Replaced Christs Teachings?