Is Jesus Savior of the World?

Does it mean that he will save this world in which we live today from destruction? Or, does it mean something else?

A Lesson From Christ’s Temptation By Satan

At Matthew Chapter 4, we read about the great test or temptation of the Son of God by Satan the Devil. In verses 8 and 9 we read how Satan …

… took him to a very high mountain and showed him all the kingdoms of the world and their splendor. “All this I will give you,” he said, “if you will bow down and worship me.

To be noted here is what Satan offered Jesus in exchange for being worshiped. Equally noteworthy is what Jesus did not say to Satan.

Did Jesus ever say to Satan, “These things do not belong to you to offer me?” No, he did not!

Is there further support that Satan is the god or ruler of this world? Yes! It can be found at 2 Cor 4:4. There we read …

The god of this age has blinded the minds of unbelievers so that they cannot see the light of the gospel that displays the glory of Christ, who is the image of God.

I will not say much more to you, for the prince of this world is coming. He has no hold over me …

We know that we are children of God, and that the whole world is under the control of the evil one.

Even today, there is an invisible spirit in the air that influences and brings out the worse behavior in people. This spirit is like an invisible contagion that cannot be seen via man-made instruments like microscopes. It is far beyond the atomic level. It is “a spirit” – the same spirit – that came to the Son of God to tempt him to disobey God. It is the same spirit that lied to Eve and led her to pass that spirit (contagion) onto to her husband Adam so that he would disobey God and do what was bad.

We read at Ephesians 2:2 where the Apostle Paul writes …

… in which you used to live when you followed the ways of this world and of the ruler of the kingdom of the air, the spirit who is now at work in those who are disobedient.

So, what can one conclude from that discussion between Jesus and Satan? That this world and everything in it – everything – belongs to Satan.

Jesus Says His Kingdom No Part of This World

My kingdom is not of this world.

It would stand to reason, then, that Jesus is Savior to a different type of world! Why would Jesus save a world that his kingdom is no part of?

Is It Written That Jesus is Savior of the World?

However, these do not indicate that Jesus is the Savior of this world in the sense that he will save this world from its certain destruction.

World, In What Sense?

If one studies translation of Bible text – languages being Hebrew, Aramaic, and Greek – they will discover that the expression world can mean …

Notice how the expression world is rendered at John 1:10 …

He was in the world, and though the world was made through him, the world did not recognize him.

Are we to understand that the world is the planet? Governments? Countries? No! The expression world rendered here is people collectively. Humankind!

Jesus is Lord, Purchaser, and Owner of Mankind

It is interesting what the Apostle Paul wrote at 1 Cor 11:3 …

Notice that Jesus has one who sits above him. Who? God! Why? Because God is Creator! He exists before everything and everyone! He is before the person own as The Son of God and Jesus Christ! No Son is equal to or before his Father.

Notice who sits above man, Christ! As the firstborn of all of God’s creations, he was before anyone called man or mankind. Recall that the man called Jesus was born of a flesh and blood woman. Before that, he existed in heaven as an angelic spirit being. Thus, he was sent into the world of mankind from the spiritual or heavenly realm. (Col 1:15)

How is it that the ascended Christ is all of mankind’s Lord and Owner? That he purchased all of mankind via his sacrificial death so that none will perish (do not confuse perishing with dying). (Acts 20:28)

Note: All who die will be resurrected from the dead as Jesus promised at John 5:28-29. Any tagged to perish has no hope of being resurrected from the dead. No one – let me repeat this, no one – today or in past times have been tagged for perishing. The time for tagging individuals for perishing is far into the future. In a time period after Christ’s yet to come 1000-year kingdom ends. I should add, PAY CLOSE ATTENTION to those who misquote John 3:16. Jesus is not saying there that we will not die (because all will), he is speaking of not perishing. He was sent into the world of mankind to save it from perishing, not dying. If all of mankind dies – and it will – he will be true to his promise to resurrect it from the death state.

If the world was likened to a good-for-nothing and worthless field that a man purchased. And, that man loved that field so much that he would sacrifice his life to save that field from being burned (perished). That man would be Jesus Christ. He purchased us whether we accept or not accept him as our Owner. There is nothing one can do about that. A literal field has no voice to say to its purchaser and cultivator, “You do not own me.”

See my video as I elaborate more on this. I cannot emphasize enough that one enters into a private place out of the eyesight and earshot of people, and as an individual, ask the Father in heaven through the office and channel of Jesus Christ, to reveal to YOU the truth. DO NOT rely on ANY religious organization to do this for you. DO NOT trust that religious organizations or persons will know the truth to dispense it to you. THAT INCLUDES ME, TOO!

It is imperative that you seek the truth about God and Christ apart from the things established in this dark world. Yes, the one Jesus said his kingdom is no part of. 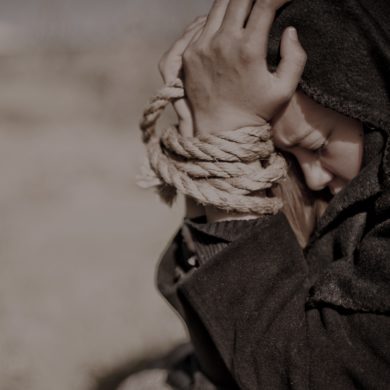 Blessed Are Those Who Are Persecuted Because of Righteousness