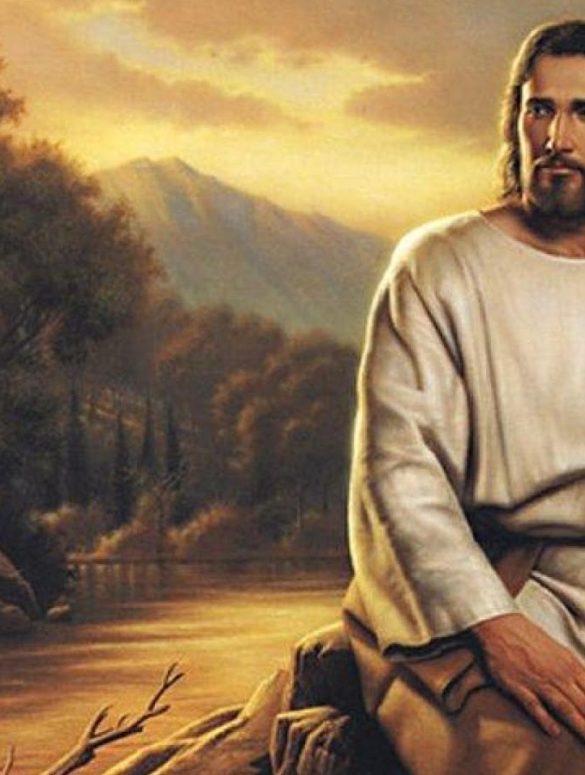 The False Christs Are Among Us

Not true or accurate; especially : deliberately untrue : done or said to fool or deceive someone.

For false messiahs and false prophets will appear and perform great signs and wonders to deceive, if possible, even the elect. See, I have told you ahead of time.

Look at the image above. We have seen many of these types of images of Jesus appear. There is power and influence in such false images. The great signs and wonders they perform is that millions of people rally behind them. A religious system – Christianity – accepts such false images as truth and promotes them to the world as truthful. The Motion Picture Industry promotes these images as being representative of God’s Son. Billions of dollars are made! Such images are near-indelible in the minds of the masses when visualizing the Messiah and the Prophets of God.

Jesus was not just referring to persons or organizations that would stand up and perform great signs and wonders, but also in the modern-day false images that what men call Christianity has set up and pushing off as true.

Note: Some of these great signs and wonders can be seen in the way Christianity presents itself to the world wielding its vast wealth, power and influence over individuals and nations and also seen the multi-billion-dollar TV Evangelist empire. These are certainly great signs that have misled persons into believing that God is behind it all. Religious organizations can also be false Messiahs (Saviors) in that they hold themselves out as being the only way to channel that God uses to “feed Christ’s sheep” rather than Christ himself being the only channel God uses. I know this is the case with the Watch Tower Bible and Tract Society. This is also true of any religious organization that demands membership with it is a requirement or that belief in the way it teaches is a requirement for salvation and eternal life. I emphasize: It is religious organizations who are making names for themselves and cleverly pushing Christ off of the grid while claiming that Christ is really there. They stand themselves up as being kings over mankind. Open your eyes!

One of the greatest deceptions that have been pushed off on the world is the portrayal of The Son of God as a flesh and blood man of European descent. I cannot overstate this enough! Just think for a moment: Is that portrayal accurate? Is it true? Removing the element of color and race, is that the state of The Son of God at present?

The answer to all of the above is, no!

We see people almost on a daily basis from the various religious organizations carrying with them colorful literature with illustrations of a long-haired and bearded White man that they say is Jesus. Think! That image is false! That is not The Son of God! The Son of God ascended into heaven more than 2000 years ago and it was not as a flesh-and-blood entity. In his present state, he is a powerful invisible angelic creature: The first born (created) of God’s creation. (Rev 3:14)

As a former JW of more than 30 years (disassociated), I used to carry around with me mentally the notion that Jesus was somehow a flesh-and-blood entity while knowing full well that he was not. The illustrations that appeared in the Watch Tower organizations publications of what was supposed to be Jesus were “just illustrations,” so I was taught to say in case someone asked. Yet, they were (and are) much more than just illustrations. They are conduits to mislead the world into visualizing The Son of God in a state that he is no longer in. And, not only that but to condition the world that he is of European descent. (Along with Adam, Eve, Angels, etc).

As a person of African lineage (African American), I am more disturbed by what we as a people have accepted without question, challenge or investigation. I fully understand that people simply “do not know.” When I accepted those false portrayals I “did not know,” so I must keep that in mind when I attempt to reach and awaken others to the deception.

I live in West Africa at present and I have seen the continent of Africa assaulted – no invaded – by aggressive Christian White missionaries from America and Europe who bring with them these false portrayals of Christ in their likeness and push them off on poor, unsuspecting and uneducated Africans. Easy prey.

As a result today, many African peoples worship, revere, fear and defend those false images (false Christ) as truth. I have seen and uncanny fear of the “White Man” in certain countries in Africa; in particular, the abjectly poor ones. If the White missionaries and White people – in general –  who claim to believe in Christ and who insist on portraying them in their likeness, why do many of them not conduct themselves as he taught. It is almost as if they do not believe in his teachings. I am simply blown away at the comments I hear many who proclaim to follow Christ with regards the other nations of peoples in the world. As an ex-military man, I have heard terrible comments from so-called followers of Christ about the dropping of atomic bombs on the “Japs” and the murder of tens of thousands of men, women, and children in the so-called fight against terrorism. (A relative term as far as I am concerned.)

I find many who proclaim to be followers of Christ false themselves as they speak more like politicians or persons who adopt the heinous acts and policies of the government to which they belong. Caesar is their true master. Christ is just something many of them put on one or two days out of the week.

Many poor and uneducated Africans come to accept these false portrayals to such an extent, that they cannot visualize Christ as anything but a White man. (This is where the reverent fear of the White man comes from). Many love what is European-based than what is innately theirs: African. (This is true to a very large extent within the African American communities in the United States).

What is more, these White Missionaries do not have the substance within them to tell the truth about these false portrayals. They allow them to happen. They train a person of color to believe as they do and elevate him to positions of Pastors, Priest, and Elders and now we have Black faces and voices speaking the lies to their own people!

No one today can claim that the images and portrayals of The Son of God in art, film, literature, and religion are accurate and true. One can – without a shadow of a doubt – say that they are false.

What I have found more disturbing than anything else, is the attitude many of my African brothers take towards another Black man or woman who brings these things to their attention. It is almost as if they are saying, “What do you Black man know? You do not know as much as the White man?” I am dead serious when I say this.

I know an African individual – a nice fellow who is sincere about his beliefs – who has accepted the religion of the Seventh Day Adventist who has forgotten who it is that he is supposed to be serving. I remember a few years back speaking with him when he was just thinking about joining that organization and I cautioned him:

Be careful that you do not end up serving a religious organization rather than Christ himself.

I said this to him because I have been in his shoes. I have been involved with Christianity for more than 40 years and I know that worship of God and service to Christ eventually end up being worship and service to the organization to which one joins. It becomes a matter of speaking and preaching to others with a view to getting them to join a particular Church. In the case of the individual, I am referring to, to get persons to join The Seventh Day Adventist organization.

What is true of almost all of the so-called religious organizations that seek to bring people into them is that they are aggressive in getting persons to come inside the church and sit down and listen to the preaching (program). This is a very effective way to reel people in. Once you get them inside the door, the hard sell began.

Who told us that one can only learn about God and Christ within the walls of religious organizations? (Another lie and deception). But this is what people are being told.

Logically, one would think that one would direct persons to The Christ – as he directed – rather than direct them to religious organizations.

So what I am saying is that most persons are recruiting others to join their religious organizations. Quite frankly many of them do it not out of love of God and to please him, but so that men will praise them for their efforts of bringing persons into the organization. No sacrifice is made to God but made to men.

Yet, we live in a world where an image stands up that the world at large thinks is Jesus [the], Christ. It is a false Christ and is no way the real and true Son of God who is NOT a man. Before being sent to into the world he was not a man and when he returned to the place he came from above (after his ministry ended and he died), it was not as a man. So images such as shown below that depict the Son of God below are inaccurate and not true.

Yet, many people in the world are stubborn and unbending They do not like this messed with or criticized because they want to believe that this is The Son of God.

I often wonder if what we are experiencing today is a push to worship a particular race of people over the rest of the human family as superior. Many people say, “No way!” But I submit to you a man by the name of Adolph Hitler had such a vision. I believe that this vision is alive and well except it is now more subtle and done in the name of what men call Christianity.

I would never bow down and serve anyone or anything like the image below and what it represents or a teaching that it utters as that would be worshiping men. The image below is a man!

Is The Bible The Word of God?