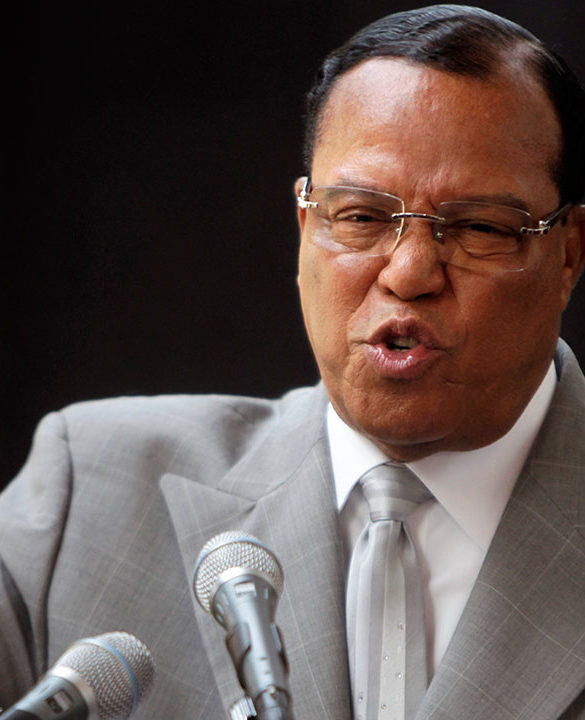 I watched a recently uploaded video on YouTube of The Nation of Islam’s leader Louis Farrakhan giving a speech and it appears that he is declaring himself as The [Black] Messiah.

To give a brief outline of his speech …

That there is another Jesus. He says, not the historical Jesus. But a prophetic Jesus.

He says that 75% of what one reads in the New Testament is not of Jesus the Prophet, but of the Jesus that was prophesied to come.

Note: WHAT IS CALLED THE NEW TESTAMENT IS FROM MEN. NAMED BY MEN. THERE IS NO SUCH THING AS “NEW TESTAMENT.” NEW FROM WHAT ASPECT?

THAT HISTORICAL JESUS – WHO ASCENDED – FORETOLD HE WOULD RETURN (NOT IN THE FLESH).

He goes on to say that the historical Jesus’ largest crowd was 35 people. Perhaps, but his teaching was large and it spread. It is not about size! Donald Trump was fixated on crowd size, too.

Minister Farrakhan speaks of himself in comparison to Jesus as “speaking to the multitudes.” In other words, Jesus’ largest crowd was about 35 people, but the Minister speaks to multitudes. Again, the size of the crowds does not matter. It is the influence and spread of Jesus’ teaching that does. Plus, the Minister has the advantage of modern technology such as broadcasting studios, the media (to include social media) and the Internet.

He claims that he is the Black Messiah who can unite “his people.” That J Edgar Hoover feared his arrival. Once again, this is a message that is not global in scope but targetted at a country.

He correctly states that Jesus knew nothing of Christianity. Jesus never spoke of it. He never told his disciples to be called Christians. The same ones who placed 66 scrolls into a canon they named the Bible, created the nomenclature, Christianity.

He says that the “Black Jesus” Black folk have been looking for has been hiding in plain sight. Is he speaking of himself?

It appears that Minister Farrakhan is saying that King David’s utterance at Psalms 40:7 applies to him. There it reads: “Lo, I come: in the volume of the book it is written of me.” (KJ21)

That is, Psalms 40:7 prophetically speaks of him!

Well, Just as the Minister mentioned “Jesus knew nothing of Christianity” he should know that Jesus knew nothing of a book called “The Bible” either. As the book known as the Bible did not come on the scene for some 1500 years after Christ ascended … and there was only one copy called the Gutenburg Bible. There was no wide circulation of a Bible until the 1600s and that was in a localized region, not world wide.

I see Black folk nodding in affirmation at every word he speaks as if they are drugged. The TV Evangelizers do the exact same thing! They make loud and grandiose speeches to get the crowds emotionally drugged and bewitched. They will believe anything!

We had better wake up from this deep slumber as many deceivers have gone out into the world.

Minister Farrakhan has made a lofty claim here. He and his words should be put to the test as stated at 1 John 4:1.

Additionally, the One Messiah said in Matthew 24:4-5 …

“Jesus answered: “Watch out that no one deceives you. For many will come in my name, claiming, ‘I am the Messiah,’ and will deceive many.”

For false messiahs and false prophets will appear and perform great signs and wonders to deceive, if possible, even the elect.

I do not feel “doubt” with regards to Minister Farrakhan’s claim that he is the foretold Messiah returned. As doubt leaves room for “maybe.” No, I feel certainty and confidence that he is not the one and true Messiah authorized and sent by the Creator of the heavens and the earth. He is one of many false Christs (Messiahs) and Prophets that will stand up.

I do not believe in the Jesus the Christ [Messiah] that the White man has crafted with their own minds and imaginations. You know, the one we see as a White man portrayed in art, film, and literature? He too is a false Jesus the Messiah.

The Messiah I believe in will return – not in the flesh as he is not flesh and blood – as a powerful invisible spirit who will establish an indefinite Messianic kingdom on earth for 1000 years and then it will end. (Revelation 20:6-8)

That kingdom is distant future.

I do not hate Minister Farrakhan. I would love to meet him! In fact, I respect him and I love listening to him speak. He speaks the truth about a great many things; especially with regards to America’s treatment and oppression of Black people. The poisons that contaminate the truth are the messages of America’s judgment and demise when God, His Prophets, and His Son spoke of judgment upon an entire world. All of the nations must go. (Daniel 2:44)

There are no modern-day Prophets or new Messiahs. Claims of such make those persons false Prophets and false Messiahs.

Persons who make such false and lofty claims will be exposed “naked” by God. They have not shown humility before Him but instead pride and arrogance. They will be humbled eventually. I would, respectfully, ask Minister Farrakhan, “Are you, Jesus? Are you the Messiah?” I would love to hear his response without the cryptics.