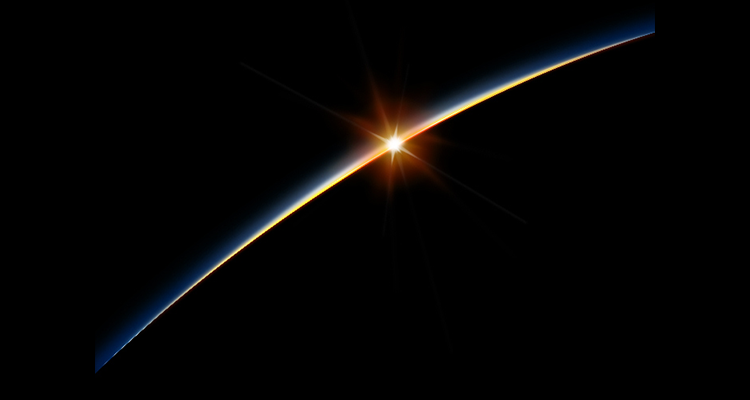 Many many voices within what is called by men, Christianity, loudly proclaim that we are currently in the last days. Why? Because they believe that the events Jesus foretold in Matthew Chapter 24, Luke Chapter 21, Mark Chapter 13 and The Book of Revelation are being fulfilled.

They see the wars and the nations of the world at odds with each other. They read about and see on TV the ravages of earthquakes and famine in the small pockets of the world. They see political officials elected to office and some even proclaim them as Antichrist. These are voices issuing forth from the religious system called Christianity. And, they are dead wrong. Here is why?

The Question Asked By Jesus Disciples

When sitting upon the Mount of Olives, Jesus’ disciples asked him a question concerning the throwing down of the temple buildings, his coming, and the end of the age. Notice carefully what Jesus says at Matthew 24:1-3:

Jesus left the temple and was walking away when his disciples came up to him to call his attention to its buildings.“Do you see all these things?” he asked. “Truly I tell you, not one stone here will be left on another; every one will be thrown down.” As Jesus was sitting on the Mount of Olives, the disciples came to him privately. “Tell us,” they said, “when will this happen, and what will be the sign of your coming and of the end of the age?”

This temple existed until 607 B.C.E., when it was destroyed by the Babylonian army under King Nebuchadnezzar. When the Israelites were released from captivity to Babylon by King Cyrus of Persia, they returned to Jerusalem in 537BCE to rebuild the temple under the leadership of Zerubbabel of the tribe of Judah. That rebuilt temple stood incomplete for nearly 500 years. It was the buildings of this rebuilt temple that Jesus was looking upon with his disciples at Matthew 24:1-3.

About seventy years after Jesus ascended, the temple was destroyed in 70 C.E. by the Romans.

Yet, Jesus’ disciples associated the destruction of the temple with his return and the end of the age. It is obvious that Jesus’ return did not occur in the year 70 C.E. and neither did the world end. So, the disciples understood the throwing down of the temple buildings to mean something else. What?

The Beginning and End of Jesus’ One Thousand Year Kingdom

It is interesting to note that as you read the question asked at Matthew 24:3, the disciples are asking when will something begin and will that something end. What? Well, since the discussion Jesus was having with his disciples was about the throwing down of the temple buildings and their associating it with the sign of your coming (the beginning of this temple) and of the end of the age (the end of the temple), it is plain that what the disciples wanted to know was when would Jesus return to establish his 1000 year kingdom and when would it end.

The throwing down of the temple buildings that Jesus was describing to his disciples was a foretelling of a time when he will reign over the earth for 1000 years and then it will end. Jesus himself is the temple. (John 2:19)

The expression throwing down of the temple buildings refer to something much greater: The establishment of the future 1000 year messianic kingdom of Christ and all of the provisions within it that will restore mankind to their Creator. The kingdom will have a beginning (Jesus’ return) and an ending. (Rev 20:7) This makes since because of the question Jesus’ disciples asked him:

Tell us,” they said, “when will this happen, and what will be the sign of your coming and of the end of the age?

The world of mankind would have to (1) end before Jesus would come as earth’s king and establish his 1000 year definite kingdom; (2) restore all of mankind to their Creator which will take 1000 years; (3) finish or end his reign as king; (4) and then the age that follows his kingdom, beginning with Satan’s ascension out of the abyss would have to exist for a time span, then that age would have to end.

This is what has not been taught within the religious system called Christianity. There is a sequence of events that must occur. They are as follows: 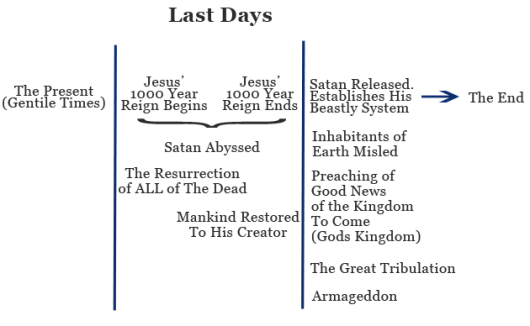 What happens when Satan is released after the 1000 years and the earth at that time no longer has The Christ as it’s king?  That is the subject of the entire Book of Revelation and 95% of the things Jesus describes in Matthew 24, Luke 21, and Mark 31.

When Jesus said at Revelation 1:1:

The revelation from Jesus Christ, which God gave him to show his servants what must soon take place …

He was referring to what must shortly take place after his future 1000 year kingdom ends. Soon from a future reference of time when those disciples (who are long dead) and the other slaves will have been resurrected back to life on earth to go through the 1000 year reign of Christ. Jesus is essentially saying to them: “As soon as my 1000 year Messianic kingdom ends, this is what will soon take place thereafter.”

He was referring to enduring or standing faithfully during that time period when Satan is released at the end of it. That time period could not be at present because everyone does not hate Jesus’ followers. Why they even hate each other and war with each other. No, this time period would have to be one where the entire world is at one point united and then that entire united world is misled. The only time this occurs is during Jesus; 1000 year kingdom up to the end of it. Then Satan is released to mislead the world of mankind Jesus restored and cause the majority of them to turn again those who will refuse to worship this beast and its image.

When Jesus’ disciples asked him at Matthew 24:3:

When will this happen, and what will be the sign of your coming and of the end of the age?

The end of the age they understood was not this one, but the one to come: The end of The Messianic Kingdom of Christ when Satan is released.

The snare many fall into is that they take the events of Matthew Chapter 24 such as wars, nation and kingdoms against each other, famine, earthquakes as being the sign that signals the return of Jesus and the end of the world. Well, they have not been paying close attention to the question Jesus’ disciples asked him and the answer he gave.

Jesus’ disciples did not ask Jesus for a series of events (signs) that they need to look for that would signal his return and end of the age. No, they asked, “What will be the sign.” More specifically,

What will be the sign of your coming and of the end of the age?

After mentioning the wars, earthquakes, famines and so forth, Jesus told them that these things had nothing to do with the end; that the end was yet to come. (Matthew 24:6)

The first thing one should note is that this sign is seen in heaven. No, that does not mean that one will look up from the earth and see it. It means that it is an event that occurs in heaven and witnessed by those who reside there: Angels.

The second thing to note is that this sign refers to the beginning of something because Matthew 24:30 says the Son of Man coming on the clouds of heaven. This beginning is the coming or return of The Christ.

The third thing that should be noted is how he comes:

With power and great glory.

If he comes with power and glory, then he comes as a king. In other words, the sign is the coronation of Jesus as king and the beginning of his 1000 year reign over the earth.

Some might think since Matthew 24:30 says “ALL the peoples of the earth will mourn when they see the Son of Man coming on the clouds of heaven, with power and great glory” means that they will literally see him. No, that is not what that means.

When this happens, ALL of mankind will know who resurrected them from the dead. How? Because Jesus says it will be his voice that the dead will hear when he calls them out of their graves.

Do not be amazed at this, for a time is coming when all who are in their graves will hear his voice and come out …

So the mourning that is to occur is not a mourning of dread, but of elation and happiness.

What Time Period Are We In Now?

Scripture makes mention of a time period called The Appointed Times of the Nations or the Times of the Gentiles (Gentile Times). This is a time period where the descendants of Noah’s son Japheth will hold power and dominion over the earth. Contrary to what many have been taught, a Gentiles is not persons who are not Jews. A Gentiles are the nations of mankind who descended from Noah’s son Japheth. Read Genesis 10:1-5. Also, read my in-depth article Who Are Gentiles?

All one has to do is look at the events in the world to see this. The most powerful nations on the earth today – United States, Great Britain, France, Germany, Russia, etc are of Japheth.

This time period will pass and the next one after it ends will be Jesus’ 1000 year Messianic Kingdom.

The Last Days, When?

The time period called the last days is not at present. It is far into the future. It begins with the ending of Jesus’ 1000 year kingdom and the beginning of Satan’s beastly rule.

The Book of Revelation – Chapter 1:1